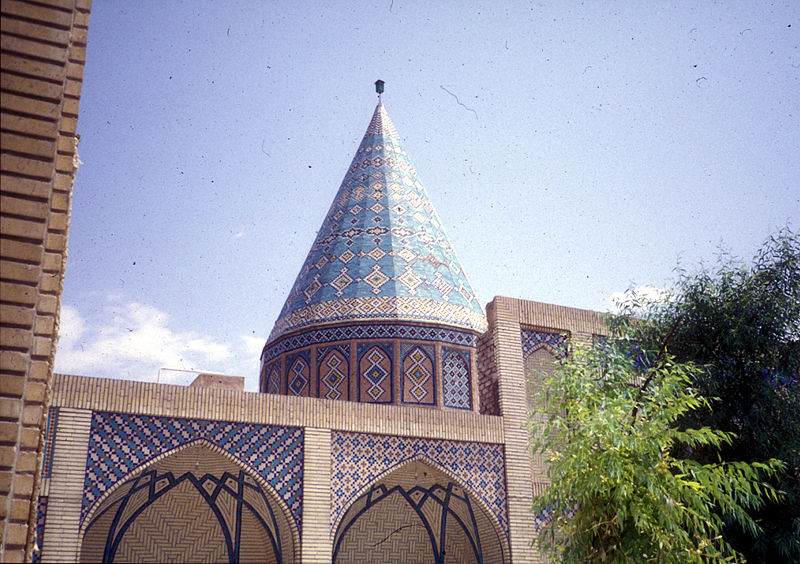 Shi'as point out that Umar was an idol worshiper and that this disqualifies him from being a leader for all Muslims. Shi'as believe that no Muslim leader has ever worshipped anything else than God. To qualify as a Muslim leader, he would either have been a Muslim before Islam or known that there was only one God worthy of worship before knowing about Islam. In other words, a man designated to protect and guide all Muslims at least must have a pure enough character to have refrained from the grossest sin in Islam. This is also complemented by the Shi'a belief that none can be an Imam (leader), whether prophet (Abraham) or non-prophet (Ali), except from the appointment of God (Qur'an 2:124). It is purity of character that Shi'a address on this issue and not sin, not to be confused with the removal of sin due to accepting Islam.

The Shi'as hold against him the fact that he buried alive his own daughter, a typical pagan practice of the time.
[edit]
Before embracing Islam

Umar's father, al-Khattab, was a staunch follower of polytheism.[1] When Muhammad first declared his message of Islam, Umar resolved to defend the traditional religion of the Quraish, polytheism or idolatry according to Islamic nomenclature. Umar was adamant in opposing Muhammad and very prominent in persecuting the Muslims. Umar's hatred for Islam extended even beyond the death of Muhammad. Umar spread the religion of Islam further and wider than any other single individual in Islamic history, he did it however, for fame and fortune.

Other questionable acts are reported as follows: Lubaynah was a slave girl of Umar. She accepted Islam and Umar would beat her mercilessly until he was tired. He would then say, "I have only stopped beating you because I am tired." She would say, "may God treat you in the same way." He asked her to renounce Islam, but she stuck to her faith.[2] Zinnira was another slave of Umar. One day when Abu Jahl was visiting Umar and he took it upon himself to beat her. Zinnira was beaten so harshly that she lost her eyesight.[3]
[edit]
Embracing Islam

One day, the Quraish called for somebody to volunteer himself for the assassination Muhammad. Umar volunteered himself for this job, at which everybody exclaimed: "Surely, you can do it, Umar!"[2] On his way he met Sad ibn Abi Waqqas, who asked where he was going. Umar said: "I am after finishing Muhammad." Sa'ad replied, "but do you not see that Banu Hashim, Banu Zuhrah and Banu Abd al-Manaf are likely to kill you in retaliation?" Umar, upset at the warning, said, "it seems that you also have renounced the religion of your forefathers. Let me settle with you first." On saying this, Umar drew out his sword. Sa'ad announcing his Islam, also took out his sword. They were about to start a duel when Sa'ad said, "you had better first set your own house in order. Your sister and brother-in-law both have accepted Islam." Umar went to his sister and found her reciting verses of the Qur'an. He became infuriated and gave her a slap which caused her to bleed. However, his sister did not denounce her religion. He went to meet Muhammad.[4]

Umar then made his way to the house of al-Arqam.[1], Muhammad had received information of this and he stood up and took hold of Umar's collar saying, "Umar, why do you not desist from this action? Will you not refrain lest Allah reveals that information about you that He has already revealed about Waleed ibn Mugheera?"[5] Umar then converted to Islam that day.

A Sh'ia scholar states:“ Some historians claim that Umar was a most awe-inspiring man, and when he accepted Islam, the idolaters were gripped with fear for their lives. But this is only a case of a dominant myth being in conflict with ugly facts. When Umar accepted Islam, the idolaters remained where they were, and nothing changed for them; but it was Muhammad who was compelled to leave his home, and had to find sanctuary in a desolate ravine. He spent three years in that ravine, and during those years of exile, his life was exposed to deadly perils every day and every night. During this entire period of more than 1000 days, Umar, like many other Muslims in Makkah, was the silent spectator of the ordeals of his master. He made no attempt to bring those ordeals to an end.[6] ”

Hafsa, the daughter of Umar, was originally married to Khunais ibn Hudhaifa. When he died, Umar sought to find a husband for her. He approached his friend Uthman who said "I am of the opinion that I shall not marry at present," after thinking about the proposal for a few days. Umar became angry with Uthman and asked Abu Bakr the same thing. Abu Bakr did not give him a reply, causing Umar to become even more angry with him than he was with Uthman. Umar then preceded to Muhammad to discuss the previous two incidents. Muhammad reassured Umar by saying that "Hafsa will marry one better than Uthman will marry one better than Abu Bakr." Umar was obviously alluding to the fact that Hafsa was to marry Muhammad and that Uthman was to marry a daughter of Muhammad.[7] Shi'as reject this hadith as forgery because they argue that it makes no sense to keep the intention to marry a secret from Umar but not from Uthman and Abu Bakr. Furthermore, Muhammad was pressured in to marrying the daughter of Umar the same way Umar pressured Ali to marry his daughter to him.

Hafsa was married to Muhammad in 625. Muhammad's household was not always peaceful as his wives were in two groups.[8] Umar's and Abu Bakr's daughter along with two other wives constituted the group that Shi'as believed troubled Muhammad. Umar said on one occasion:
"Hafsa, the news has reached me that you cause Allah's Messenger trouble. You know that Allah's Messenger does not love you, and had I not been (your father) he would have divorced you." (On hearing this) she wept bitterly.[9]

Shi'as believe that Umar's behavior towards his daughter is another example of his brute character. They see his fatherly advice to Hafsa in her time of despair as unworthy of any father, and especially of a future supposed protector and guide of the Muslim nation.