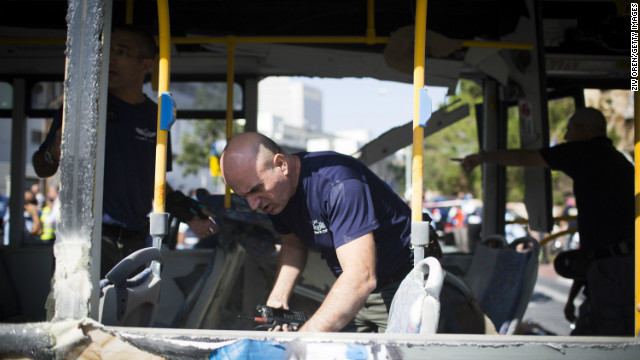 STORY HIGHLIGHTS
NEW: Several West Bank Palestinians are arrested, a police spokesman says
Police say the suspect is a member of Hamas
A Hamas leader denies his party was involved
24 people were wounded in the attack, three of them seriously, police say

Jerusalem (CNN) -- An Arab-Israeli has been arrested in connection with the bombing in Tel Aviv of a bus in which 24 people were wounded, police say.

The suspect is from Taibeh in central Israel, police spokesman Micky Rosenfeld said Thursday. The bomb was detonated Wednesday by cell phone, he said.

The arrest occurred Wednesday, he said, adding that the attacker was carrying out orders from Hamas and Islamic Jihad from the village of Beit Lakia, in the area of Ramallah.

The spokesman said the arrest occurred several hours after the attack in an operation carried out by the Israeli police, the Israel Defense Forces and intelligence agents.
Exclusive: Hamas' political leader
Rubin: Israel has an enemy in Gaza

Several West Bank Palestinians also have been arrested in connection with the bus bombing, Rosenfeld said.

He added that the investigation is continuing.

Three of the victims were seriously wounded in the lunchtime attack, which occurred near the Defense Ministry headquarters, police said.

The attack occurred a few hours before the declaration of a cease-fire that halted eight days of hostilities between Gaza and Israel.

Hamas leader Khaled Meshaal said on Wednesday that Hamas was not involved in the attack, which he blamed on Israeli Prime Minister Benjamin Netanyahu.

"Who created the circumstances that led to this?" he asked. 'It is Benjamin Netanyahu with his crimes, in killing the kids of Gaza, and the continuity of aggression."

After Israel-Gaza: Who won, who lost?

CNN's Sara Sidner and Neda Farshbaf contributed to this report from Gaza City.