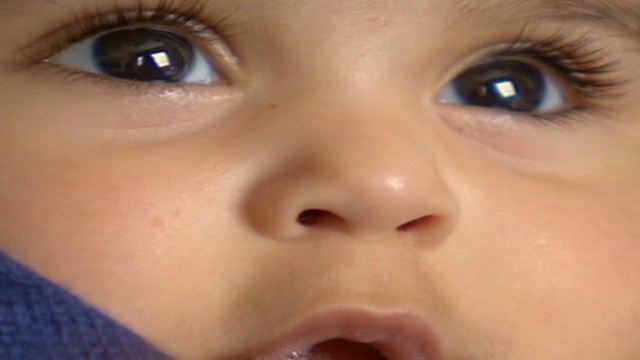 Nablus, West Bank (CNN) -- Dalal al-Ziben holds her son and kisses his head. Al-Ziben never thought she would have another baby considering her husband has been inside an Israeli prison for 16 years and will likely never get out.

"When they arrested my husband I was 18 years old," she says.

As is expected from her in conservative Palestinian society she says she has been faithful to her husband. She has simply been waiting, hoping her husband may one day be released from incarceration.

READ: All prisoners on hunger strike will end it, Palestinian official says

It hasn't happened and likely never will because he is serving 27 life sentences and an additional 25 years for helping plan a deadly bombing in a Jerusalem market. An act of violence she says he has admitted to.

Palestinian prisoners jailed for terror attacks are not afforded conjugal visits. Nonetheless al-Ziben says she got pregnant by her husband because he managed to have his sperm smuggled out of a high security prison.

"Why does the wife of a prisoner have to suffer and stay like this without children and a family? It is our right to meet our husbands and our right to have children," Al-Ziben says.
If I can do anything to help these women I will do it
Dr. Abu Khaizaran

The mother-of-two is one of five Palestinian women making the same claim. In an examination room Rimah Silawi, 32, stares at the tiny black dot on the baby monitor as the technician tells her she is one month pregnant.

Her husband is also serving multiple life sentences and she too says she received In Vitro fertilization using sperm smuggled from inside an Israeli prison.

She and the other women will tell you all about their babies, but not a word about how exactly their husband's semen was smuggled out of a high security Israeli prison leaving enough time for the semen to still be considered viable.

"I'm not going to tell so I won't ruin it for other people," Rimah Silawi whispers in response to our question.

The Razan Medical Center for Fertility and IVF in the West Bank town of Nablus is performing the artificial inseminations. Doctors say they have dozens of samples they are told are from prisoners.

The samples come in at all hours of the day and night and are handed over in all sorts of containers according to the doctors who tell us some samples are viable while others have to be thrown away.

"A lot of things, many things maybe in cups, in ointment containers," Dr. Salim Abu Khaizaran, the head of the fertility center, says while describing the methods used by the prisoners.

While doctors at the center say they can't verify the sperm is actually from their husbands in prison, they require close relatives from both the wife and husband's side of the family to sign papers saying the sperm belongs to the husband in prison.

Dr. Abu Khaizaran also encourages the women to spread word of their plans to use artificial insemination in their community so they do not face ridicule or more sinister repercussions if they are suspected of cheating on their imprisoned husbands.

"We are a male dominated society, we are an eastern society. Our women, whose husbands have been given long sentences, they have no choice but to wait for their husbands to get freed and as you know the female productive life is really limited," Dr. Abu Khaizaran says.

The doctor claims prisoner's wives face this dilemma because they will never have children or more children if their husbands are imprisoned for life, and if they do get out it may be too late to conceive and the husbands may even leave them for another woman who can.

He says he has seen the latter happen.

"Really the one who pays the price the heavy price is the woman. If I can do anything to help these women I will do it," the doctor says.

He and his staff are giving prisoners wives the fertility treatment for free, calling it an act of humanity.

Israeli prison officials say they doubt the validity of the women's story. A spokesperson for the Israeli Prison Authority told us officials very much doubt the technical ability for sperm donation because of the strict controls and security inside the prisons. They said it was hard to fathom, but "who knows?"

Fertility specialists in the U.S. told us it is actually possible for sperm to survive anywhere from a few hours to up to 48 hours in clean unconventional containers if kept at room temperature.

The women say what is most important to them is that they and their families and communities know the truth.

They still hope, one day, sperm smuggling from prison won't be necessary either because their husbands will be allowed to come home or the prison system will allow conjugal visits.

READ: Why Israelis believe one soldier is worth 1,000 Palestinian prisoners