Kab was a Jew. He hated Muhammad. Kab never lifted a weapon against Muhammad or any Muslim, he only voiced his opinion against Muhammad, and made up some unsavory poems about Muslim women. Muhammad saw him as a threat, and therefore had him murdered in the night.

http://atheism.about.com/b/a/257517.htm
...
Freethinkers and heretics who defame Islam should be killed:

"Indeed, this is our Prophet's law regarding anyone who mocks him, and belittles Islam and scorns it... They should be killed... Take an example from Muhammad ibn Maslama and his companions [who assassinated the poet Ka'b ibn Al-Ashraf]. It is intolerable and outrageous that the heretics are among us, scorning our religion and our Prophet.

"Therefore, you must fear Allah and do His will. Do not consult anyone about the killing of these heretics
Top

http://www.drishtipat.org/blog/category ... t-know-it/
...
Despite being stabbed at the age of 82, Nobel lauret Naguib Mahfuz lived till the age of 94 before passing away yesterday. He was stabbed because his questions and frank approach while discussing religion Islam was not liked by Islamic fundamentalist. 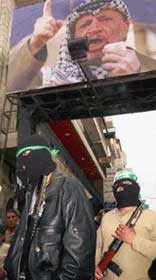 He was ambushed by armed members of the Al-Gamaa Al-Islamyia on the morning of 17 December 1991. Using iron pipes, they continued to beat him on his 2 legs and right arm until he lost consciousness. EOHR received information alleging that the Al-Gamma had ordered Beshry Khalil to pay a fine of 3000 Egyptian pounds for having allegedly criticised the Emir of the Al-Gamaa. According to that information, the 17 December 1991 attack was as punishment for his refusing to pay the fine.

According to the primary medical report on Beshry's injuries issued on the same day of the attack at Dairout Central Hospital, "suspected fractures in both right and, left legs and in the right arm, in addition to contusions in the left arm and the face, haemorrhages, cuts and bruises in the left and right legs." It was later ascertained that there were actual fractures in both legs and the right arm which necessitated casts, while the right arm required special surgical interference.

When EOHR's fact-finding mission met with Beshry in April 1992, it found that his right arm had been totally disabled, incapable of any movement.

A church treasurer, married with 6 children. He was ambushed by members of the Al-Gamaa Al-Islamyia on the morning of 21 December 1991 and beaten to unconsciousness by iron pipes.

When EOHR's mission visited him in April 1992, it found that his right arm and leg were still in a cast, while the left arm was totally incapable of movement. Merely to go to the toilet, four persons had to carry him.
Top

One example is that of the house which the official statement of the Ministry of the Interior depicts as the core of the dispute in the village.

EOHR stated that the reality of the matter was that a Christian agreed with a Muslim to sell him a house for a certain sum of money, against the wishes of the Al-Gamma Al-Islamyia which wanted the house to be sold to a different Muslim for a smaller sum, as well as a Jizia of LE500 to be paid to the Al-Gamma.

This incident, which took place on 9 March 1992 resulted in 3 persons killed: one a Christian, another a member of the Al-Gamma and a third, a Moslem bystander killed by a stray bullet.

EOHR noted that the statements issued by the Ministry of the Interior at the time insisted on portraying the matter as being in the nature of an inter-family dispute, deliberately cloaking any sectarian aspect to it. The incident was followed by a statement issued by the Al-Gamma in Dairout in which it pledged to kill four Christian persons, which the statement named, in revenge for the killing of its member in the 9 March incident. It ordered all Christian adult males to remain in their homes and warned that any who went out would be killed.
Top

"We are strongly bothered by this show of aggression against this media house, which is a conscious attack on the freedom of the press and fundamental freedom of expression," said union secretary general Omar Faruk Osman.

The Islamists took Mogadishu from US-backed warlords in June, and have been expanding their territorial control since then. On Sunday, they moved into the southern city of Kismayo, taking control without firing a shot.

But there have been anti-Islamist protests this week in Kismayo, and Somalis in general are becoming increasingly worried about signs of hardline practices by the movement, which was born out of sharia courts.

The Islamists' rise has challenged the aspirations of Somalia's western-backed interim government - based in the provincial town of Baidoa - to restore central rule to the Horn of Africa nation for the first time since 1991.

Islamist sources said HornAfrik had made false broadcasts about this week's protests in Kismayo, including reports that a boy had died and women were mistreated in the violence.

The Islamists say they are simply restoring law and order to Somalia after 15 years of anarchy since the ousting of dictator Mohamed Siad Barre. They are also openly calling for mainly Muslim Somalia to be ruled by a sharia system.

But critics say the Islamists are extremists who have links to al-Qaeda and are harbouring foreign radicals in Somalia. The Islamists' top leader, Sheikh Hassan Dahir Aweys, is on US and UN lists of people with alleged links to terrorism.

ID Nugroho, Probolinggo -- Seven former counselors at a drug and cancer rehabilitation center in Probolinggo were sentenced on Thursday to jail terms of between three and five years for the crime of insulting Islam, a clear sign that the East Java judiciary is clamping down on alternative Islamic thought despite the religious freedoms guaranteed by the Constitution.

The verdict at the Probolinggo District Court came after the Malang District Court sentenced a Muslim preacher last month to two years in jail for introducing an Indonesian translation of the Arabic sholat prayer.

At the Probolinggo trial, the panel of judges found that the seven counselors, through their teachings at the Cahaya Alam Cancer and Drug Addiction Healing Foundation, had introduced teachings and practices that contravened key precepts of Islam. These included introducing notions of "free sex" and a belief that recognized Satan as a creature who served God. The main evidence behind the allegations was a book of guidelines, which the clinic had circulated among patients.

The judges handed down six five-year jail terms to the six male counselors, including foundation chairman Ardi Husen, while the only woman in the group, Mufidah, received three years. The clinic, which was established in 1991, had treated thousands of people suffering from cancer and drug addiction.

Police began to investigate the clinic's alternative healing activities in May, after the local Indonesian Ulema Council (MUI) issued an edict calling the foundation's teachings heretical. The council had earlier obtained one of the foundation's books from a former patient.
Top

Abdul Khalik, Jakarta -- Actor Anjasmara and model Isabella were reported to the Jakarta Police on Thursday by an extreme right wing Islamic group for allegedly posing nude in a photograph displayed since Sept. 17 at the Bank Indonesia Museum in Central Jakarta.

The Islam Defenders Front (FPI), which apparently is not pleased with the artistic photo, also reported photographer Davy Linggar to the police.

FPI member Jafar Sidik alleged that the three had insulted Islam by portraying Adam and Eve in the nude. Adam is believed to be a holy prophet by Muslims, which accounts for around 85 percent of Indonesia's 220 million people.

Jafar also said that the pictures were considered pornographic, and could contribute to immorality among teenagers who see the exhibition.

"The pictures display the classical story of Adam and Eve in Eden. How could they depict a prophet in the nude like that," he queried after filing a complaint at the Jakarta Police headquarters.

Jafar stated that "many people had come to them complaining about the nude pictures", which according to the complaints had aroused sexual desires among young people.

Jafar alleged that the actor, model and photographer had violated Articles 156 and 282 of the Criminal Code, which carries a maximum punishment of five years imprisonment.

News reports said earlier that Anjasmara had repeatedly asked for forgiveness from anyone offended by the photo. He said that he had no other intention but to create art.

Anjasmara also denied that the picture were pornographic as people should look at the whole concept and the beauty of the picture.

He said that he was not completely naked when the picture was taken because he was still wearing underwear during the photo session.

The FPI has reported several celebrities for various perceived legal violations over the past few months.

Music band Dewa was reported to police because FPI thought the group had insulted Islam by using Allah's name on the cover of its album. Dewa and FPI agreed to settle the case out of court.

FPI also reported Miss Indonesia and Miss Transvestite Indonesia because they deemed them to be an insult to Muslims in Indonesia. Those cases are still being investigated.
Top

Since MUI issued religious edicts in late July that banned liberal interpretations of the faith, death threats against members of the 4-year-old Islamic Liberal Network, known as JIL, have poured in.

The fatwas that JIL says triggered the hate campaign coincide with the closure of numerous unauthorized Christian churches by hardline Muslim groups and the jailing this month of three Christian women for inviting Muslim children to church events.

"The fatwas have had a snowball effect," said Nong Darol Mahmada, a co-founder of the Islamic Liberal Network who has received dozens of death threats via e-mail and text messages.

"People believe that JIL is banned and that it is now legally permitted (under Islamic law) to murder us." Police guard the Jakarta office that houses JIL after one militant organization threatened to attack the group, which has never shied from controversy since its inception in 2001.

It has been quick to poke holes in the arguments of militant clerics and take the lead in debates about issues from marriage to the role of religion in politics, often using radio to reach a broad audience across the world's most populous Muslim nation.
Top