http://www.sullivan-county.com/immigration/thornton.htm
The Chorus of Useful Idiots
By Bruce S. Thornton 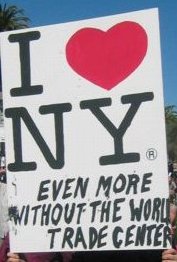 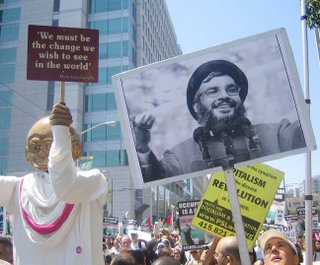 January 15, 2007 -- Has a former president of the United States - a Nobel Peace Prize winner, no less - given his blessing to wanton murder and terrorist assaults against Israel?

Sure looks that way.

How else to read that astonishing statement on page 213 of Jimmy Carter's new anti-Israel screed, "Palestine: Peace, Not Apartheid"?

To wit: "It is imperative that the general Arab community and all significant Palestinian groups make it clear that they will end the suicide bombings and other acts of terrorism when international laws and the ultimate goals of the Roadmap for Peace are accepted by Israel." (Emphasis added.)

You don't have to read between the lines here.

Carter isn't calling on the Palestinians to give up terror and murder now as a way to convince Israel they are serious about peace. Rather, he says they can wait until they've achieved their goals at the bargaining table. No need, says Carter, to give up terrorism until then.

Certainly, that's how 14 members of the Carter Center's advisory board read that paragraph. Indeed, it's why they angrily submitted their resignations last week. :twisted:

That's also how Melvin Konner read it. He's a respected anthropology professor at Emory University and had been asked to be part of an academic group meant to advise the former president and the Carter Center on how to respond to criticism of the book.

As Konner wrote to John Hardman, the center's executive director, in declining the invitation: "I cannot find any way to read this sentence that does not condone the murder of Jews until such time as Israel unilaterally follows President Carter's prescription for peace. The sentence, simply put, makes President Carter an apologist for terrorists and places my children, along with all Jews everywhere, in greater danger."
Top 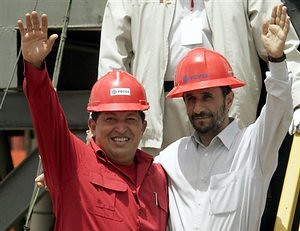 The presidents of Iran and Venezuela have agreed to spend billions of dollars to help other countries free themselves from what they describe as 'US domination.'

"This fund, my brother," Chavez said, "will become a mechanism for liberation."

Chavez said the fund "will permit us to underpin investments ... above all in those countries whose governments are making efforts to liberate themselves from the [US] imperialist yoke ... Death to US imperialism."

Ahmadinejad, who is on a tour of Latin America, said that Tehran and Caracas had the task of "promoting revolutionary thought in the world".

"The reason for all the current problems is the erroneous direction of the powerful countries, where there is poverty, hate, enmity and war," he added. HATE ?? Siapa yg benci siapa ????

NICOLE Kidman and a few friends have made a public stand against terrorism.

It specifically targets "terrorist organisations" such as Hezbollah in Lebanon and Hamas in Palestine.

"We the undersigned are pained and devastated by the civilian casualties in Israel and Lebanon caused by terrorist actions initiated by terrorist organisations such as Hezbollah and Hamas," the ad reads.

"If we do not succeed in stopping terrorism around the world, chaos will rule and innocent people will continue to die.

"We need to support democratic societies and stop terrorism at all costs."
Top

Rome, Jan. 16, 2007 (CWNews.com) - According to the Catholic charitable organization Caritas, the number of marriages between Italians and foreign natives living in Italy has risen tenfold in the past 15 years.

About 10% of the mixed marriages involve a Muslim with a Catholic spouse. In the vast majority of such cases, the children are raised as Muslims. If the wife is Catholic, statistics show that she is likely to convert to Islam.

D'Souza: "There is no 'inherent conquering spirit' in Islam" (ooooh such a ... USEFUL Idiot)
Top Mark Anthony Norwood, of St Martins Road, Gobowen, Shropshire, who in December 2002 was convicted under the 1986 Public Order Act of a "religiously aggravated" offence after displaying a poster picturing one of the Twin Towers in flames and containing the words "Protect the British people" and The Muslim symbols of a crescent and star were also shown surrounded by a prohibition sign and the message "Islam out of Britain."

The "religious aggravation" aspect of the conviction was introduced through the application of the 2001 Anti-Terrorism Crime and Security Act.

SO much for FREEDOM OF SPEECH !!!
Top


ROBERTSON/Pewawancara : ... Tell me about Hezbollah. We hear about the terrorist group Hezbollah. What relation do they have to Syria?

GENERAL AOUN: Hezbollah is not a separate entity from Syria. It is under the Syrian operational control.

ROBERTSON: The so-called terrorist group is under the operational control of Syria?

AOUN: Yes, 100 percent, no question about that.

Beirut - Last week Ya Libnan reported that general Aoun declared that Hezbollah is his closest ally. Yesterday he made it official. Aoun and Sayyed Hassan Nasrallah, Hezbollah Secretary General met to ink their agreement.

Nice ! :twisted: With friends like these, you do not need an enemy. (Dgn pengkhianat sbg teman, kau tidak lagi perlu musuh.)
Top 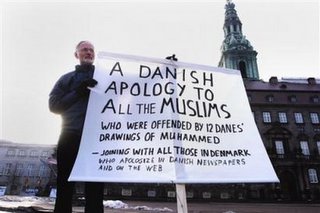 Thursday, February 16, 2006
Here is a picture of a man welcoming his new muslim overlords: His name is Jens Byskov.

Jens, you should be ashamed of yourself. Please look at the map below and decide where in the Islamic world you would like to live. You do not speak for the rest of us. 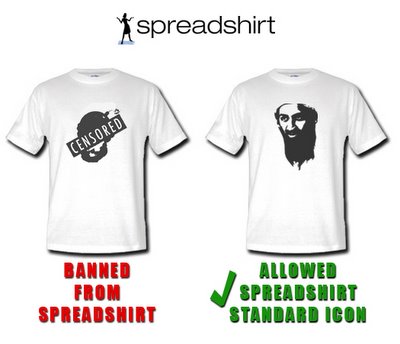 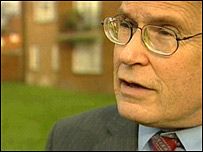 Mr McLuskey said the school was too quick to sack him